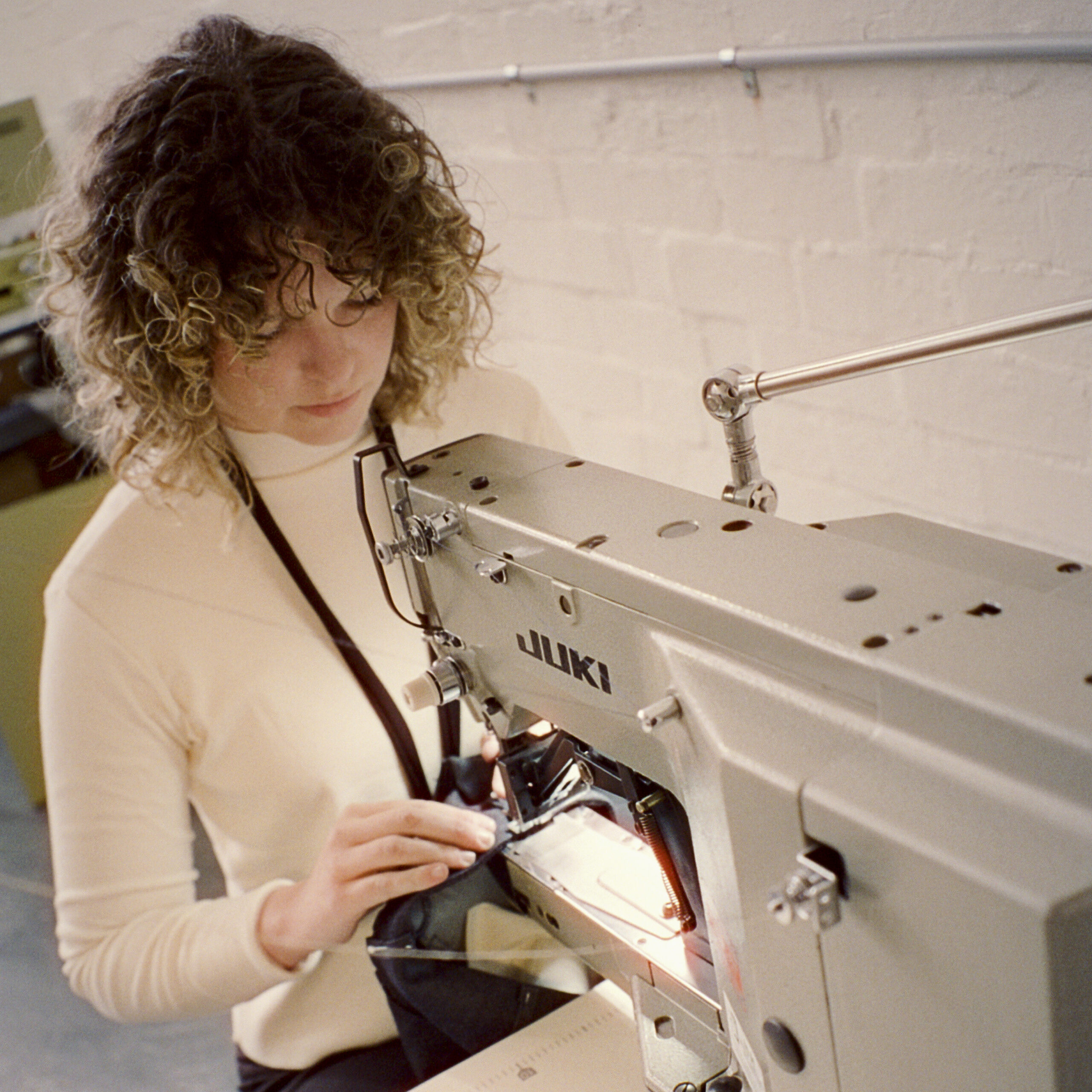 This is a featured post written by Simone from A.BCH, an Ethical Clothing Australia accredited brand.

My name is Simone and I am the Head Machinist at A.BCH. My job involves manufacturing all the garments we make in-house, including all of our custom pieces. I also do sampling of new styles and some repairs by hand. I enjoy problem solving and figuring out the best way to achieve the results that Courtney (the Founder and Director of A.BCH) wants for the garments.

”I started sewing as a teenager and I always loved the idea of being a garment technician.

I was born in Toronto, Canada and moved to the south-eastern suburbs of Melbourne in 1997. I started sewing as a teenager and I always loved the idea of being a garment technician. Something about following instructions and finishing something perfectly has always been really satisfying to me. After a lot of trial and error at uni, I finally finished my Bachelor of Fashion Design at RMIT in 2018. However, working as a machinist wasn’t really promoted as a goal at uni, so I didn’t seek out a position right away.

I started out doing a lot of freelance work, from pattern making, to textile design, to working as casual machinist doing small runs for local brands. I started working at A.BCH just over a year ago. 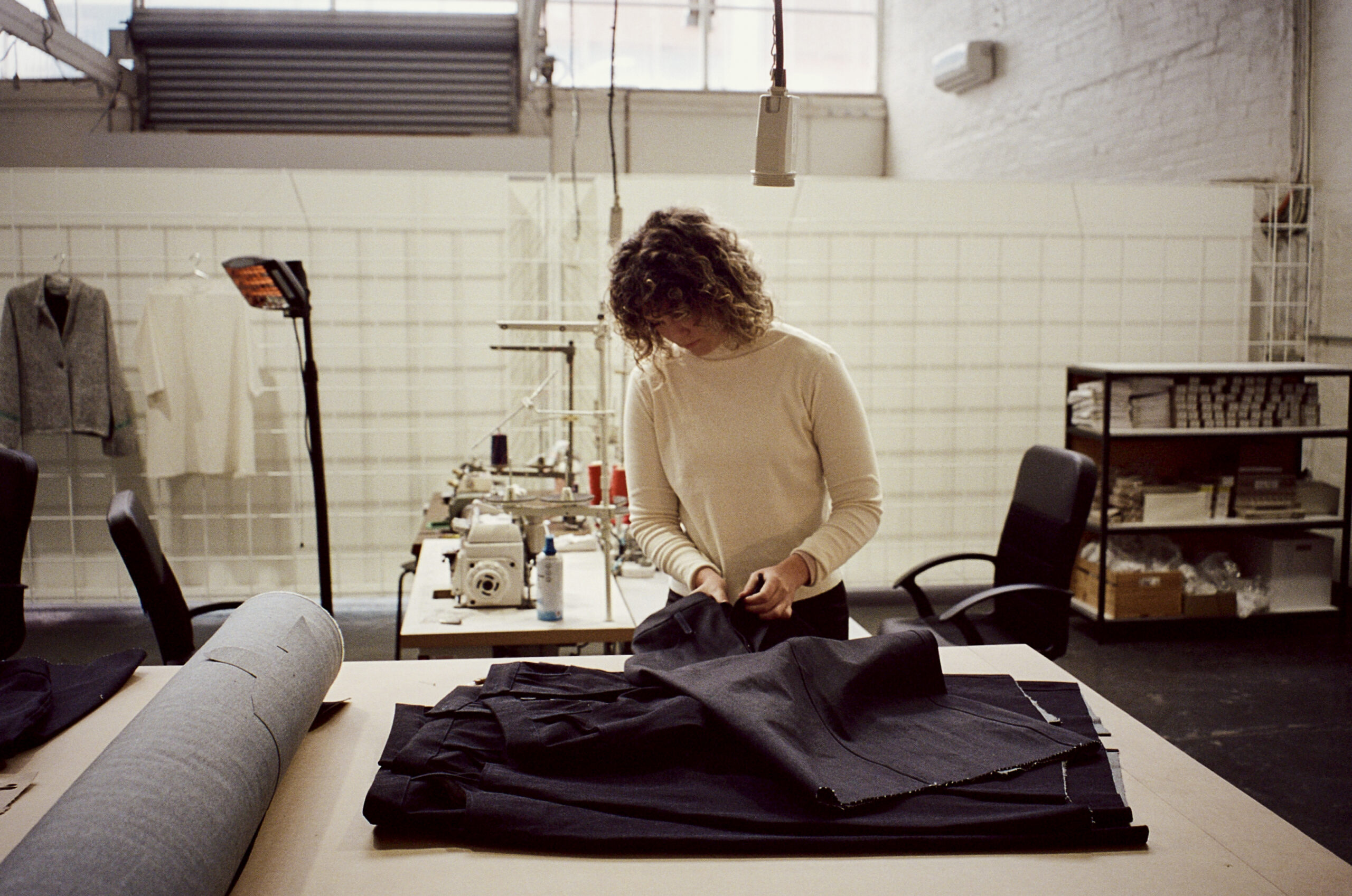 I learnt a lot about industry standards of sewing while at uni, but I had a really great knowledge base from Judy, who was my beautiful sewing teacher of many years. All the best tips and tricks that I’ve learned are from machinists, tailors, and anyone I could convince to teach me about whatever they were doing at the time. The rest is practice, practice, practice, trial, error, another error, and you can find a tutorial for almost anything on YouTube.

”All the best tips and tricks that I’ve learned are from machinists, tailors, and anyone I could convince to teach me about whatever they were doing at the time.

My current favourite piece from A.BCH is the A.38 Raw Denim Trench Coat. It is such a stunning piece, and you feel like such a boss wearing it. It’s beautifully tailored and the denim is just so lux. I love it because I could easily see it being part of my wardrobe forever. 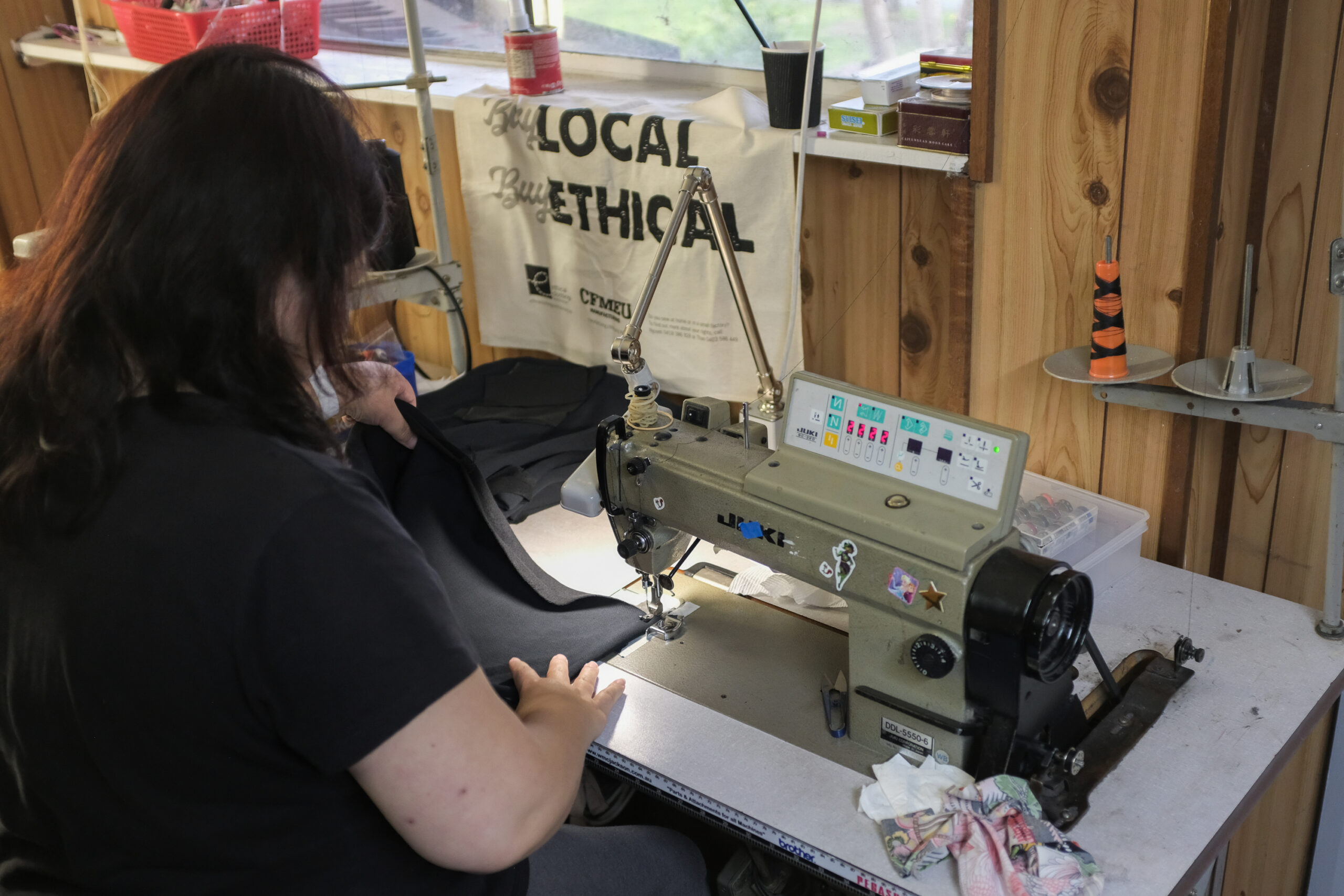 My name is Kim. I’m originally from Vietnam and I now live in Melbourne

I’ve been working as a sewing machinist for a long time! I started working in my 20s, so I have been doing this job for over 20 years. I started working in the industry because it was the family business. My cousin had a factory and many people in my family worked there. Some of my family members are still working in the industry here and back home in Vietnam, but I’m the only person working from home (as an outworker) in my family.

”Before this job, I was being paid per garment, but now I have a signed agreement and part-time hours. I have more job security, better pay, and other entitlements.

I have five kids and used to be a full-time mum, though I did occasionally do a little bit of work at a clothing factory. I used to work long hours, sometimes until 2am, to get sewing jobs done. When a lot of the machinist work went offshore, we had to take a lower pay because there wasn’t enough work. Now there is a shortage of skills in the industry because people left it. I did too – I went to work in a bakery and as an Uber driver for a while, but I came back to sewing because I love the work.

Working from home suits my schedule and lifestyle. I have two girls in primary school and working from home allows me to drop them off and pick them up from school. When they’re sick, I don’t have to take sick leave because I can look after them while I work. Being in my own space and managing my own time is important to me. 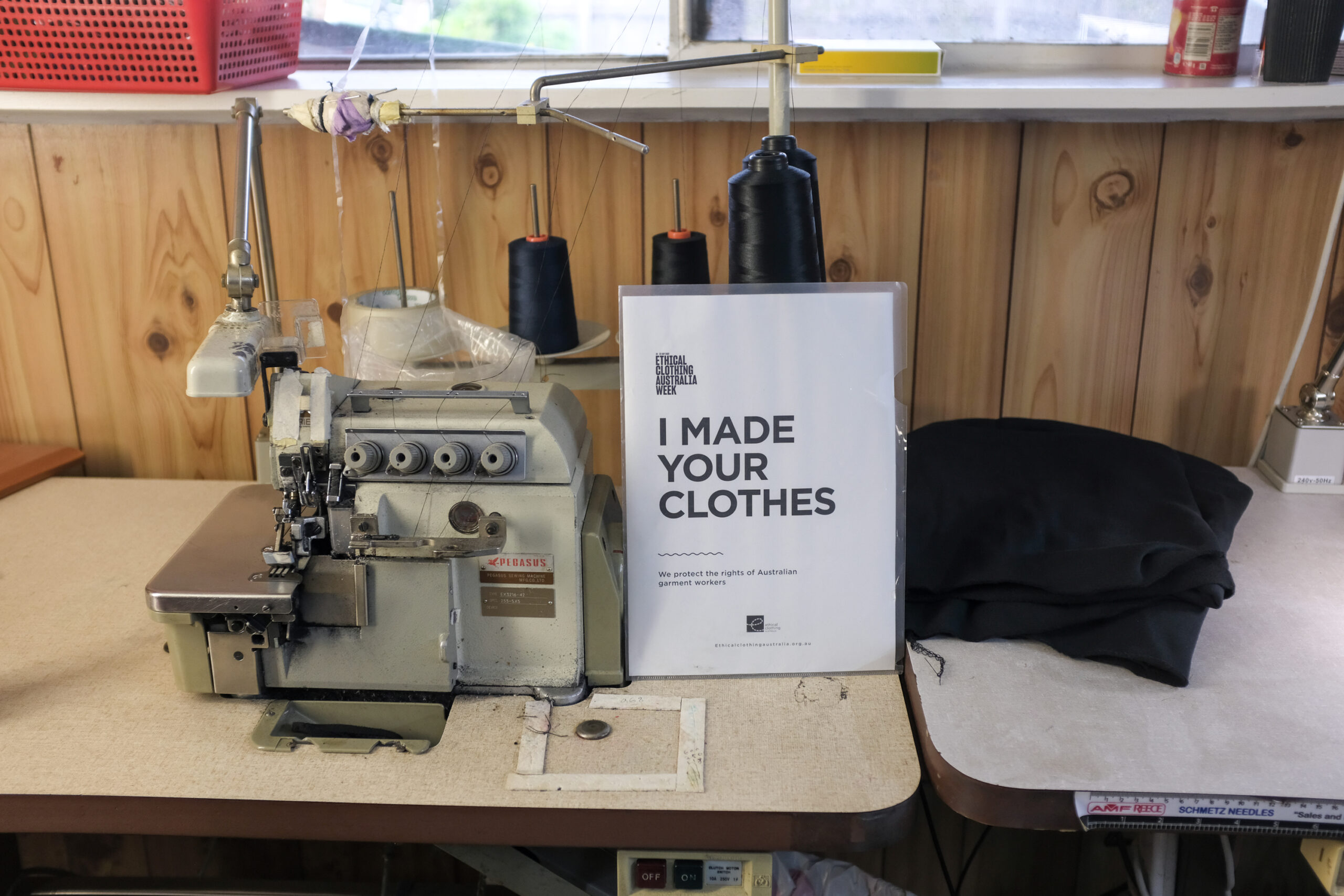 Apart from sewing, my favourite thing to do is cook for my kids. We’re a big family and we love to eat together. On the weekend, my older children come over to my house and they always ask for special meals to take home with them. Their favourite dishes are phở (brothy rice noodle soup) and crab or pork bánh canh (thick noodle soup).

”For me, it’s not about the money, it’s about whether my work looks good or not.

I have never worked within an Ethical Clothing Australia supply chain until now. Before this job, I was being paid per garment, but now I have a signed agreement and part-time hours. I have more job security, better pay, and other entitlements.

I specialise in sewing stretch fabrics and I prefer to sew simple garments – I make hoodies, jersey dresses, T-shirts, and women’s clothing. I get an order from the company and make some samples, usually in a size 10, 12 and 18. I send the samples over to the company, and they check the fit of the garment on their fit models. If there are any issues, they mark up the samples and send them back to me for adjustment. After doing the sampling, I receive the full order and a timeframe to finish the job. When I get an order done ahead of time, I get to take some time off!

I believe in being a responsible and reliable worker. If the company says there is something wrong, I’ll be there in half an hour to fix it. For me, it’s not about the money, it’s about whether my work looks good or not. 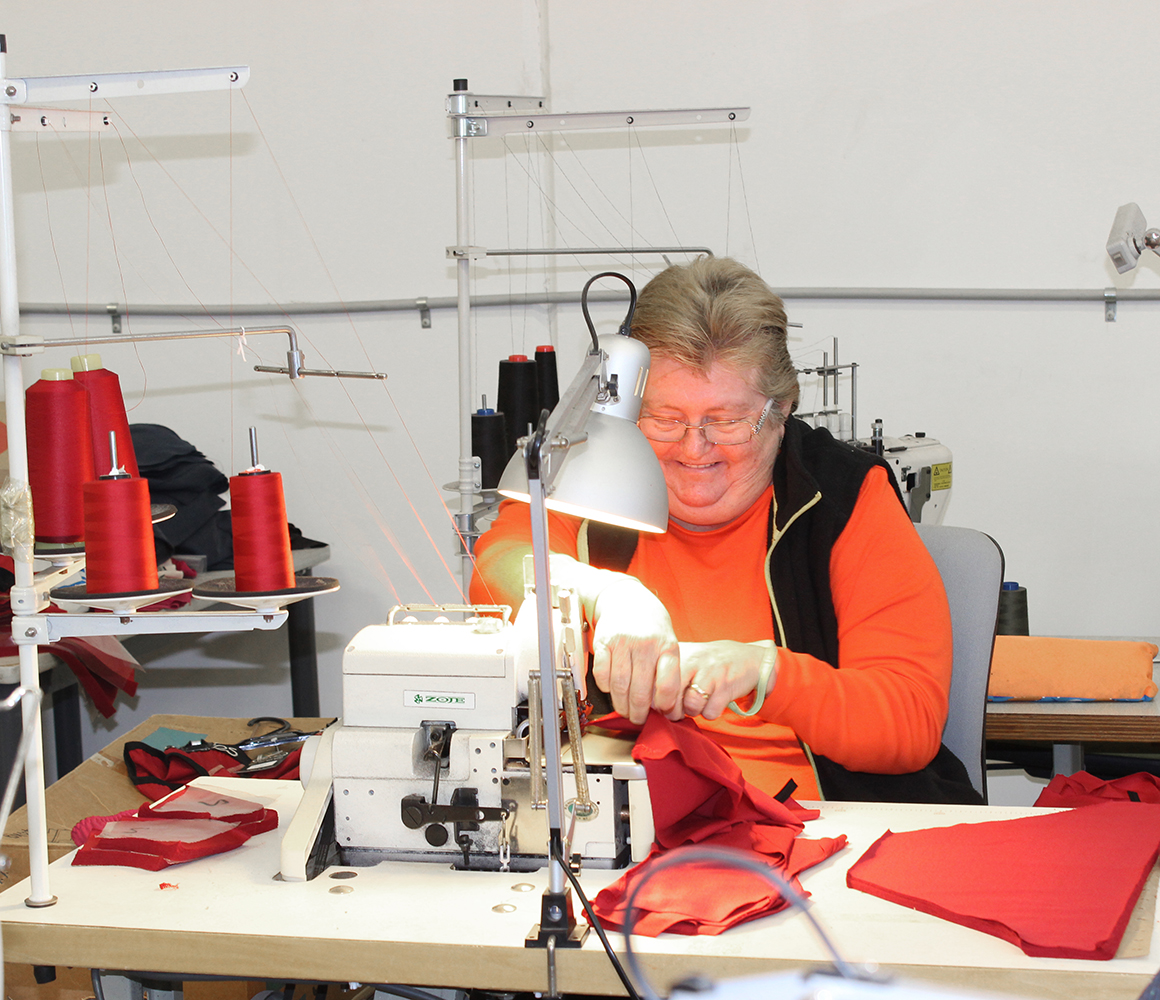 This is a featured post written by a team member at Merino Country, an Ethical Clothing Australia accredited brand.

I started working as a sewing machinist in the 1970’s and learned on the job. I had decided that I didn’t want to go to school anymore, and my dad said, ‘If you don’t go to school, you have to go to work’.

My first job as a sewing machinist was at a factory underneath the Story Bridge in Kangaroo Point, Brisbane. I have worked as a sewing machinist ever since for a few different companies. I started working with Merino Country making thermals for their contract with the Australian Defence Force in 2010.

These days, I help make everything in Australian Merino from Merino wool undies (Wundies) to T-shirts. Overlocking (sewing the edges of fabric to prevent fraying) is my specialty. Even though I could have retired by now, I enjoy coming to work for the company, friendship and laughter!

My favourite Merino Country piece is the Short Swing Jacket as it is easy to wear and keeps me warm, and it looks great paired with the Merino Leggings.

This is a featured post written by a team member at Merino Country, an Ethical Clothing Australia accredited brand.

When I was 16 years old, I finished school and I had the option of working in a few different areas, like retail or hospitality. I chose to pursue work as a sewing machinist because it was something I loved to do, and still love 44 years later!

My first job was making bras at a big international underwear company. When I first walked into the factory, there were so many machines lined up on the factory floor and I thought that it was huge and daunting. This was the job that taught me everything I needed to be a sewing machinist. After I’d been at the factory for a few years, the work was moved offshore like a lot of manufacturing in Australia. After that I worked with another manufacturer for many years where I made Merino Country’s first pairs of Merino wool undies (Wundies) in 1998. 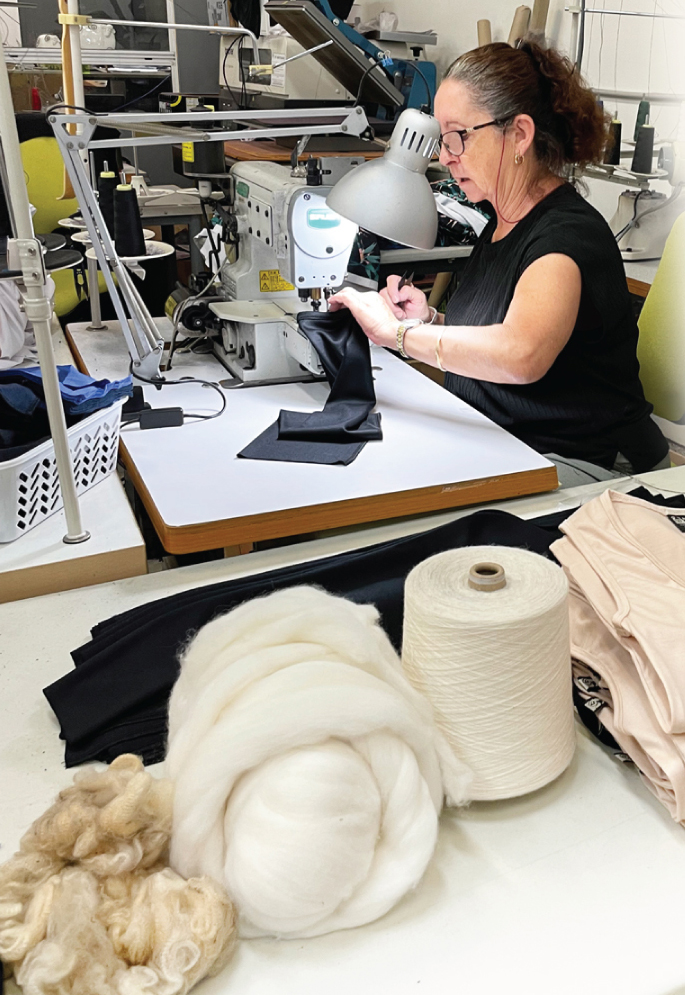 I’m now working at Merino Country, and I love my job! It is so fulfilling to make something from pieces of fabric and transform it into something beautiful and useful. Working as a sewing machinist is classified as a “factory job” and I think there is still a lot of stigma around that. To me, these jobs are vital. Especially for fashion – you need to learn a bit about every process to make a garment – not just the design part.

My favourite piece from Merino Country is the Pocket Dress. It’s a very versatile piece that you can add layers to, plus it’s comfy and looks great too! 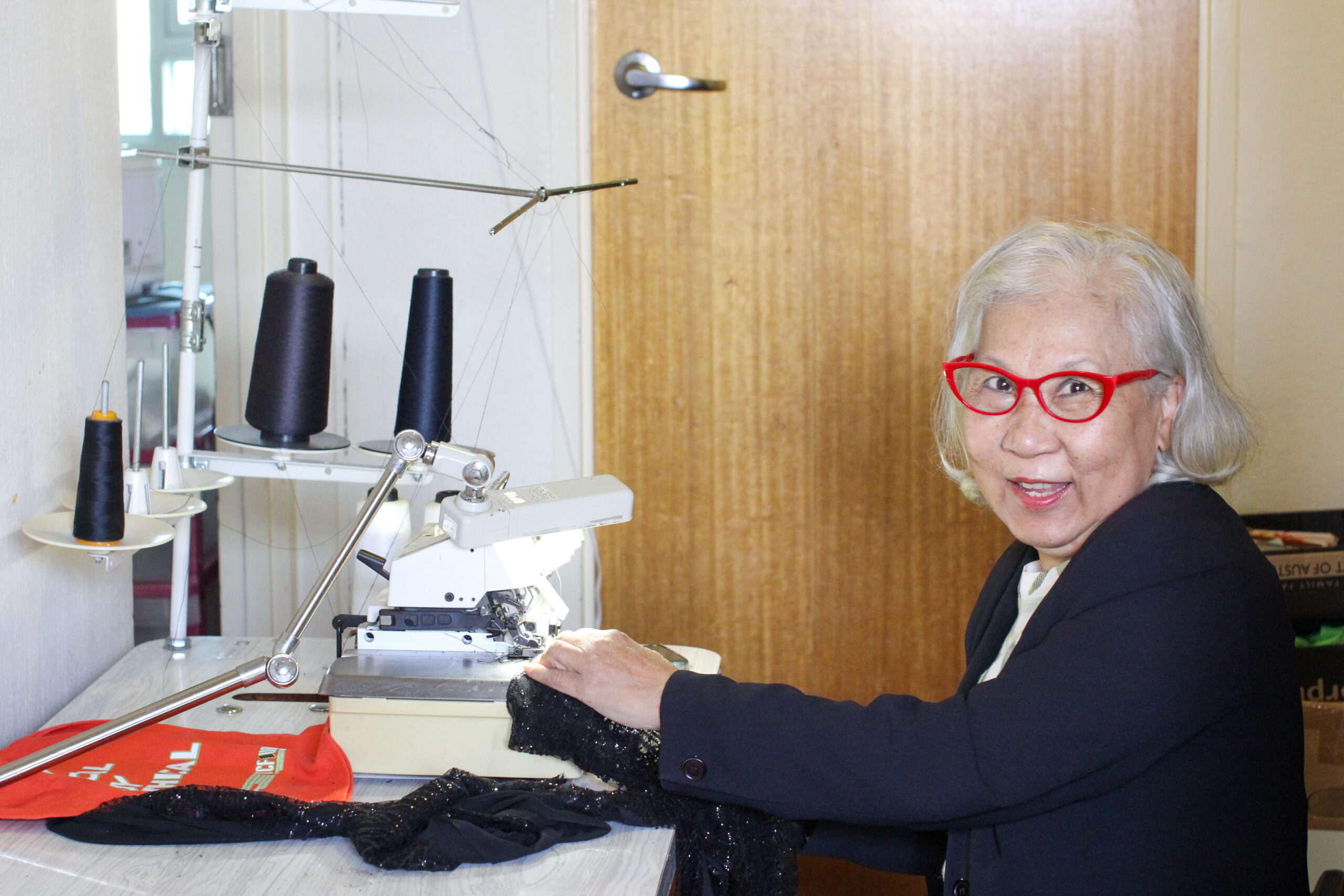 We would like to introduce you to Anh, who is a Melbourne-based outworker.

Anh learned how to sew and tailor clothing back home in Vietnam when she was a girl. She moved from Vietnam to Melbourne in 1991 after marrying her husband and started working in a clothing factory in Melbourne. After having her daughter, she decided to become an outworker so that she could look after her daughter at home.

Anh is a skilled worker and makes high-end fashion garments for women, including dresses, shirts and jackets. She receives the cut fabric in bundles and sews together the garment, which includes everything except for the buttons, buttonholes, pressing and trimming. 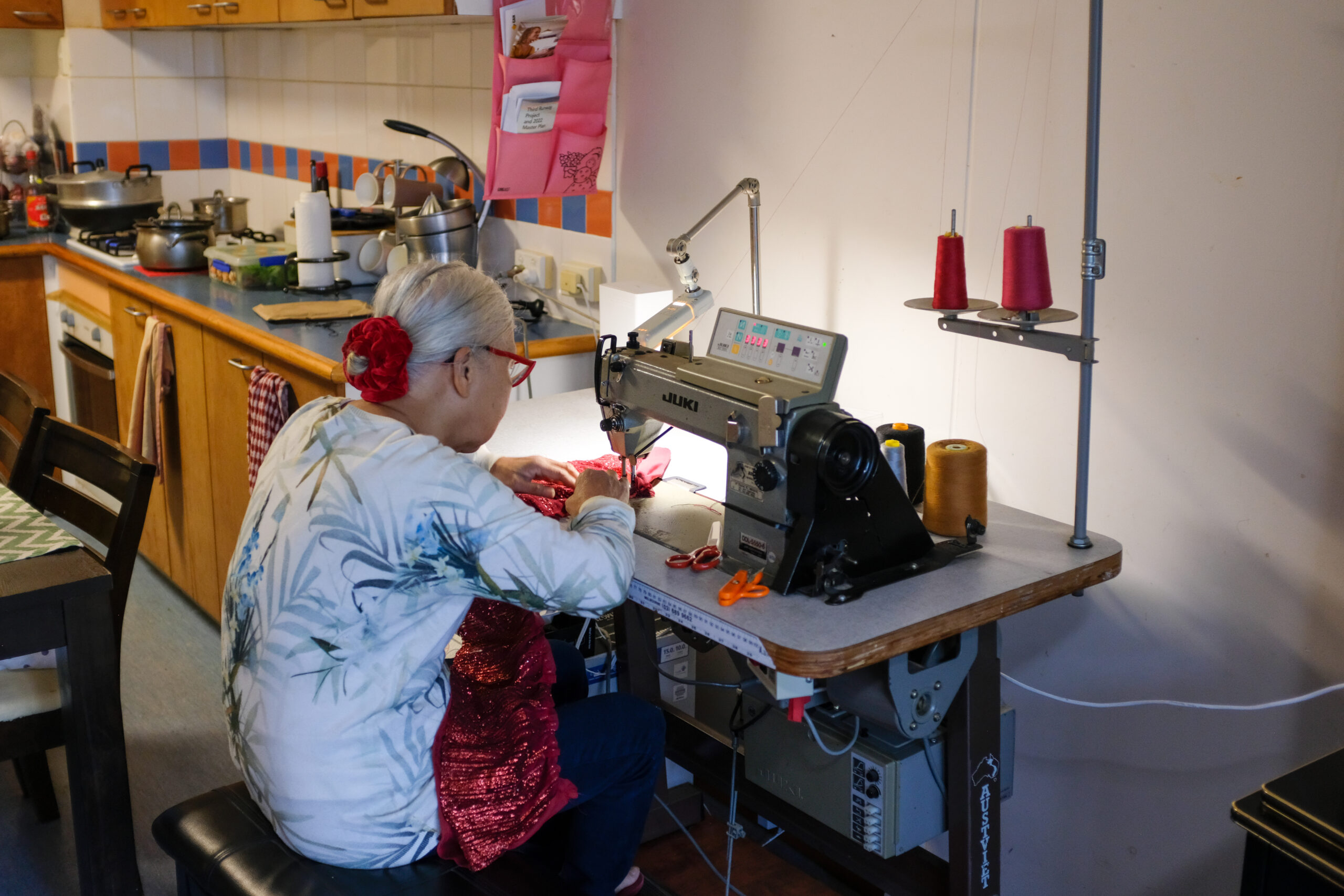 Working from home meant that Anh was isolated and without support, because she no longer had people at work to talk to. She was put in touch with the Textile, Clothing and Footwear Union, and has since received a lot of support and information about outworkers’ rights. 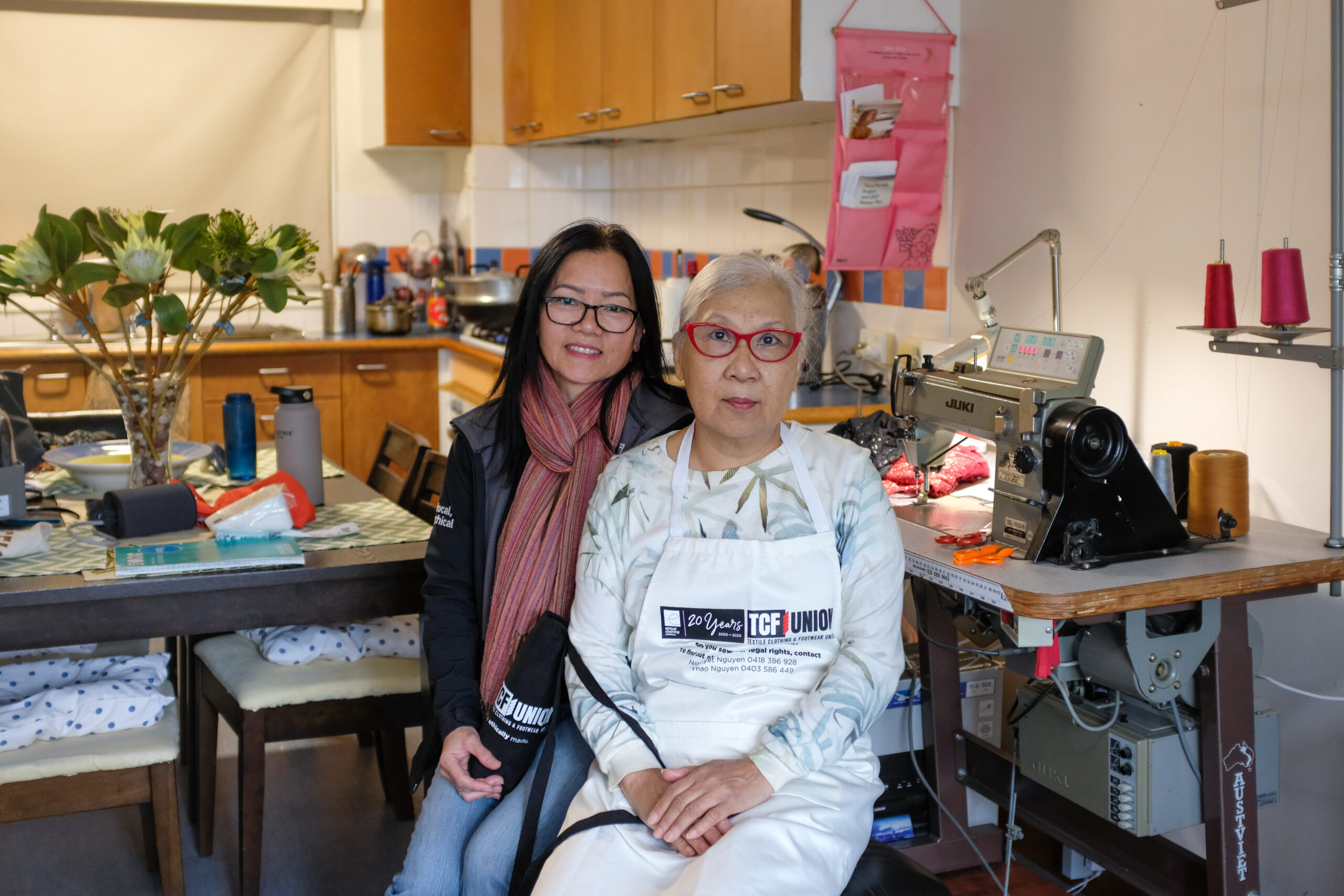 Anh is pictured in her home workshop with Nguyet Nguyen, an Outworker Outreach Officer on the compliance team. 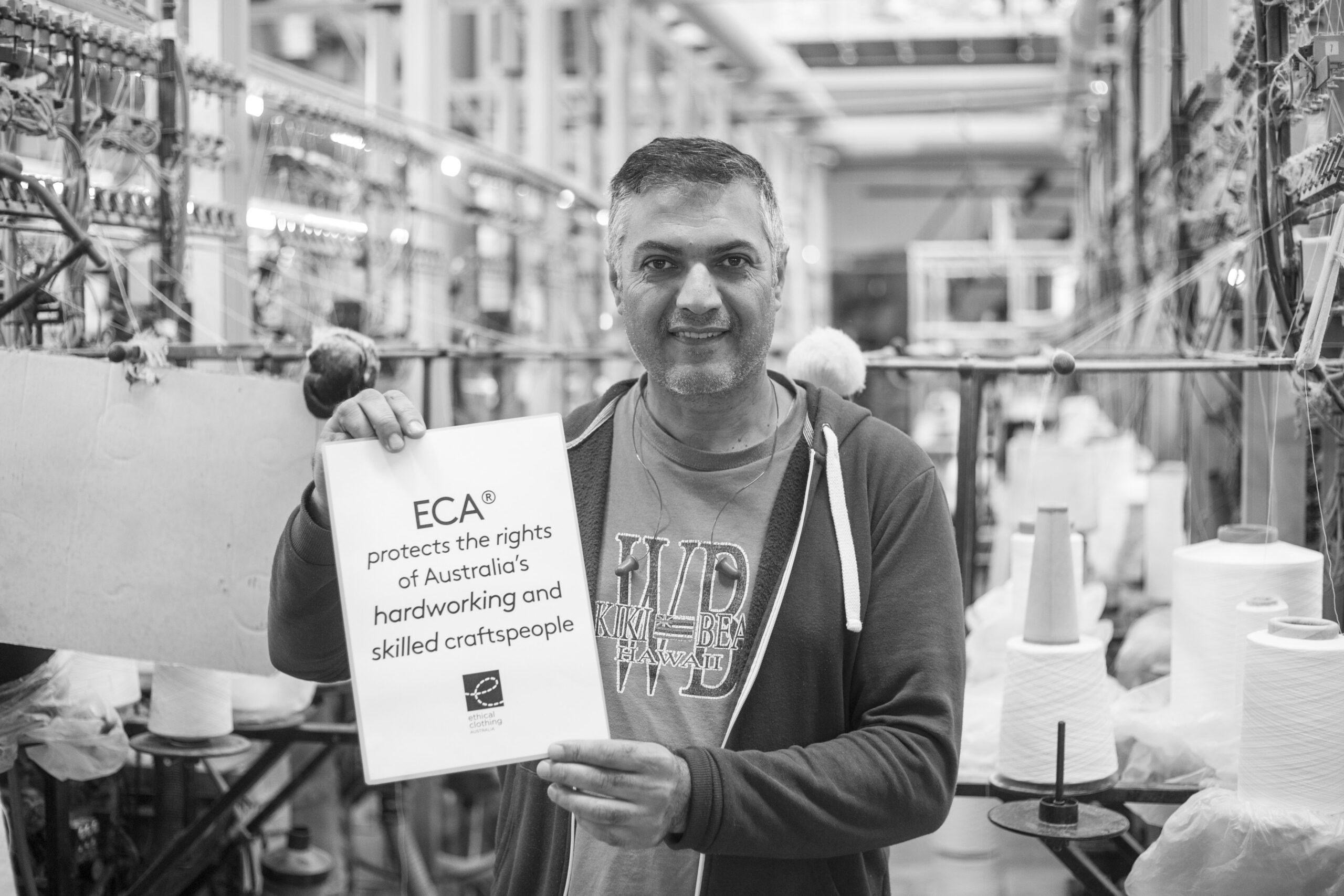 This is a featured post written by the team at Wilderness Wear, an Ethical Clothing Australia accredited brand.

George … Ok, his surname might not be ‘Clooney’, but he looks a bit like the movie star. Actually, to associate our George with any sort of movie star would be incorrect, because he is more like a rock star – of socks (does that make him a sock star?).

As the chief behind the banks of sock knitting machines at Wilderness Wear, George has carved out an interesting career for himself. Initially a law student, he diverted his studies to accept a mechanics apprenticeship where he remained until that business closed after moving its manufacturing offshore. Already known to the management of Wilderness Wear, George quickly moved over to his current role.

Part of George’s skill and value comes his ability to manage machines of all different brands, origins and ages. Some, like the old Bentley Komets from the 1950s, are best serviced with a hammer while the newer equivalents by Sangiacomo from Santoni in Italy are highly sophisticated machines.

There is a political claim to fame within George’s CV, and that is the occasion where he made a pair of socks for the Prime Minister of Australia, The Hon. Paul Keating. A man of known sartorial high standards, the socks were surely a fitting match to his fine Italian suits!

A champion – or pin-up boy, if you like – of the Australian manufacturing sector, George is a valuable player within the Walls of Wilderness Wear and is representative of the drive of like-minded companies to keep these valuable skillsets onshore.

Stay Up To Date With ECA News